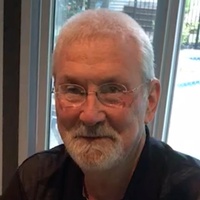 Haddon Heights - On April 17, 2019, Harry J. Carman, age 70, passed away at Samaritan Hospice Inpatient Center in Voorhees after a hard-fought battle with cancer. Born in Camden, Harry served honorably in the United States Army during the Vietnam War as a platoon leader with the 82nd Airborne Division. He was a small business owner and entrepreneur for most of his adult life. Harry served his country again in 2012, when he deployed as a contractor in Iraq. He then spent several years traveling the world as "Santa." He made music and told funny stories, but most importantly, he made the world a better place.

He is lovingly survived by his wife and high school sweetheart, Mary (nee Donegan); his two sons and their wives, Christopher and Kimberly, and Jonas and Brittany; his grandchildren, Christopher Jr., Teagan, Zoey and Layla along with his brother, John.

Relatives and friends are invited to his Viewing on Monday, April 22nd from 7:00 - 9:00 PM at the Healey Funeral Home, 9 White Horse Pike, Haddon Heights. His Committal Service with military honors will be held on Friday, May 3rd at Brig. General William C. Doyle Veterans Memorial Cemetery, Wrightstown, NJ.

In lieu of flowers, donations may be made in his name to the Cathedral Kitchen Inc., 1514 Federal Street, Camden, NJ 08105 or at www.cathedralkitchen.org/commemorative-tribute-donations.